IN A REMARKABLY short space of time gimbals have become a hugely popular filmmaking tool, and the technology is advancing at breakneck speed. Just a few years ago I invested in one of the first handheld versions, which turned up in a flight case that was large enough to sleep inside. It took forever to set up and I needed a C-stand to support it when not in use.

Fast forward to today, where we’re blessed with a plethora of options for all our devices, from smartphones through to cinema cameras. They can be mounted on poles, sliders, on vehicles – in fact pretty much anywhere you like really. Gimbals have opened up a world of possibilities to filmmakers of all abilities. The Manfrotto 220 and 460 gimbals are typical examples of what you can expect from these products in this day and age. They’re highly affordable, straightforward to set up and work with and, thankfully, they’re a LOT lighter!

However, while gimbals have come on in leaps and bounds, it’s important to realise there’s still a learning curve to undertake before you can get the best out of one. They all largely follow the same principle but it’s how you hold, walk or run with them that’s such a critical part of getting those buttery-smooth shots we all love.

So don’t be upset if you pick up one of these lovely tools and have a few minor teething problems – it’s perfectly natural, but stick with it and you’ll get there. Just take it slow: when you walk with a loaded gimbal you need to walk like a ninja treading on eggshells. Sounds crazy, but if you watch the video that accompanies this review you’ll see what I mean.

We all know Manfrotto, and I’m sure you’ve probably already got a bunch of their stuff, whether it be lighting stands, reflectors or tripods. It’s a solid brand and it’s really great they’ve now dipped into the gimbal market. Both the 220 and 460 have stacks to offer, but they are set at different price points – £289.99 and £487.99 respectively at CVP – and they’re designed to offer slightly different things, so the first thing to look at is which one should you go for?

Quite simply they’re designed to accommodate different weights of kit, and you need to consider the weight of everything you plan to load on to the gimbal’s camera plate. The Manfrotto 220 can take a maximum payload of 2.2kg, while the 460 can handle more than double that at 4.6kg. Personally, I wouldn’t load up the gimbals to the hilt – they will absolutely work but it will leave you no headroom with future kit. Leave yourself 10% in the weight allowances.

After years of using gimbals I can honestly say that the lighter you keep your rig the more you’ll appreciate it at the end of a shoot. The brilliant thing about both the Manfrotto gimbals is that they’re not heavy out of the box. The 220 is perfect for a mirrorless outfit, while the 460 can cope with larger and heavier kit, such as a DSLR or Cinema set-up. There is a balancing act (no pun intended) with each of these – in that you want to be as light as possible but you also want to be able to use whatever set-up suits the job. I’m the type who errs on the side of caution and would go for the 460 to ensure I have room to expand my kit and I could add other bits to the gimbal as I grow into it.

Each of the arms on the gimbals comes with a lock to make balancing easier.

The key to successful smooth operation comes down to how you hold the gimbal – but also the fact it needs to be balanced. It’s not difficult to set one up and I’ll show you in the video how to do it quickly – but getting the payload right will not only help you chose which gimbal you want to buy but it will also benefit you in terms of making sure that it works well and reliably.

Both the gimbals I was working with come with 3 axis stabilisation, meaning there’s three gyroscope motors that compensate for movement. It all happens thousands of times a second and it’s super clever. There’s one on the pan, one on the tilt and one on the roll axis, and they all work together to stabilise your movement.

With both gimbals there’s an easy-to-use app for Android and iOS users, allowing loads more configurations without you having to set things up from the screen on the gimbal handle. You can also remote control the head from your smartphone, so if you were to mount the gimbal on a crane/tripod and be looking to move it without climbing up a ladder you can.

Both kits also come with a bunch of cables that enable you to connect to a whole range of popular cameras. This will give you the ability to control the camera/focus/settings from the gimbal handle or the app. Some cameras have more controllability via the gimbal than others, but the most popular models are allsupported and new ones are being added via updates all the time.

Balancing both these gimbals is really easy, and there are ‘locks’ on each arm so you can pop on your camera and balance each axis in turn. It also means they will pack away nicely and won’t fall open in your bag, although both the 220 and 460 come in very sturdy hard foam cases for transport.

Whilst it’s important to get the balance as spot on as possible don’t get too hung up about it – both these gimbals have a good tolerance for small variations. If you have a lens that has an extending element then moving from wide to tele, for example, will throw off the balance. But if you do this  mid  shoot  and

you’re not loading the gimbal right up to the limits of the motors then you’ll be ok. If you change lenses though you will need to rebalance.

Because I’m using a relatively heavy mirrorless setup, I found myself working primarily with the 460, and It never missed a beat and worked flawlessly for hours on end throughout my shoot. That’s exactly what you’ll be looking for if you’re a busy filmmaker working on a pro job.

In terms of power, the 220 has a built-in battery that’s good for around seven hours wihile the 460 has removeable batteries that keep going for twelve hours. You can carry spares of course and so should never be in danger of running out of juice.

If you fancy trying the Manfrotto gimbals out for yourself, or any other piece of filmmaking kit for that matter, get in touch with CVP and fix up to visit their Newman House HQ in London’s Fitzrovia: just enquire via the website or call 0208 380 7400. They have a room there dedicated to motion that contains a full spectrum of production equipment ready to see, combine and evalaute, and they would be delighted to give you a one-to-one consultation, demo the kit you’re interested in and let you play! 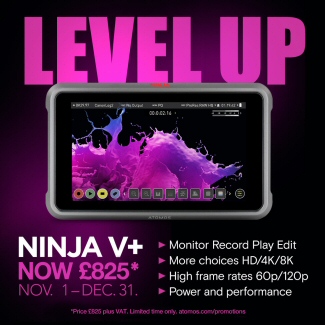